The BP Portrait Award is shrinking. In 2010, the exhibition displayed 58 pieces. By last year, when the show was shifted to a smaller gallery to allow space for an execrable Michael Jackson exhibition next door, only 49 pieces were included. This year the number is 44, and the space has shrunk again. It’s a sad state of affairs –and baffling for a show that consistently pulls in such a quantity of visitors. What’s going on here?

Any analysis must of course begin with the most important factor: the selected artworks. Creatively I feel this year’s show was a success. All four main prize winners are fully deserving for different reasons. Charlie Schaffer’s winning portrait of his friend Imara shimmers in a humming forcefield of winding brushstrokes whichknit the sitter into both her voluptuous fur coat and the background. It’s a highly technical piece of paintingwhich also manages to offer an emotional ‘felt’ response– by no means an easy trick to pull off.

Third prize winner Massimiliano Pirronti performs a similar feat in a slightly different way – presenting his maternal grandmother in a hyper-realistic mode, which manages to avoid technical sterility by allowing all those extraordinary details – the knitted cardigan, the ribbed hot water bottle, the arthritic hands – to exist in service of connecting us to this character on a minute, really rather intimate level.

Daniel Nelis’s small portrait of his partner Andrea is a particular highlight for me, both tender and exquisitely executed – while Bridget Cox’s portrait of her friend Hilary, titled ‘Chinese Cloth’, uses colour to great emotive and expressive effect. The latter feels like a very nostalgic portrait, evoking associations with the Camden Town Group, and especially Harold Gilman, whilst also remaining fresh and contemporary.

Sarah Jane Moon’s portrait of Dr. Ronx, offers a larger scale, more extrovert kind of image, the colourspositively singing out from the gallery walls. My personal favourite in the show is Simon Thomas Braiden’s small picture of his friend Ian, which is positively bejeweled in its technical excellence, yet also hints at a deep emotional subtext.

Braiden’s work brings me neatly to a discussion of the hang. Such small and intimate works as his risk, in my opinion, being utterly lost due to the lack of space in the gallery. This is the first time (in my 20 years of visiting BP, at least) that works have been ‘stacked’ on the wall. Previously the convention was to hang each piece, regardless of size, at eye level with it’s own breathing space, together with an explanatory wall label.

This year, in addition to works stacked two high at certain points, there is a kind of ‘feature wall’ which brings together about a dozen pictures. One unfortunate picture is hung up top, way over head height – whileanother, ‘One Minute to Midnight’ by Nigel Whittaker, is a highly detailed picture which demands close scrutiny,yet bafflingly hangs just beyond reach. You’d need opera glasses to see it as the artist intended.

Some visitors may feel reasonably ambivalent about this change, and I can empathise. The feature wall is visually very impressive, and is tastefully hung. I can see that the curators have worked diligently to bring this section into harmony. It looks good, and perhaps if we’re being generous we could say that BP was overdue a shake-upin the hang.

Speaking as an artist, however, the move feels a bit disrespectful. BP is not a selling exhibition like the RA Summer Show (which has a long tradition of stacking submissions). Aside from the slim chance of getting a prize, the only thing BP entrants have to directly gainfrom their involvement is the potential publicity it offers. Artists incur direct financial expense at every stage of their involvement. What’s the point if their work is then lumped into a general blob, inadequately labeled, and hung so high as to render the brushwork they have bled over invisible to the naked eye? A friend of mine once described artists as ‘the sandwiches at someone else’s party’ and this is how it feels. The artists are being undervalued by this hang, and it would be wrong to defend it on aesthetic grounds, because it’s so clearly rooted in economics. Someone gave the curators less space to fit in 44 artworks, because the NPG is trying to max out the potential of its ticketed exhibition space next door. The show comes out looking good, but that’s only because the art is still great.

BP seems to be at a crossroads, devalued by its host institution, and in the process getting scant love from recent print and online reviews. Is someone at the NPG trying to kill it off by degrees? Many have suggested the answer is to open the show out to other media – to allow for, perhaps, more graphic, sculptural and digital interpretations of the human face. Personally I like the fact the BP has always known what it is at heart – a painting award. I’m dubious about seeing it open out because firstly, as of 2019, there doesn’t seem to be any willingness to offer up the physical space in the building required to incorporate such a wide range of media. A show open to all media would need to be much bigger. Secondly I also worry that a race to self-consciously ‘refresh’ the awards, will lead to sensationalist decision making – where the judges go for more ‘out there’ work each year, in order to increase visitor numbers by grabbing headlines in the Metro. Perhaps I sound hysterical, but if you’re unconvinced, remember that the Jerwood Drawing (that’s DRAWING) Prize was won in 2016 by a video installation. I would hate to see BP go down this route.

Add to all of this the sponsorship debate, which may well play into the NPG’s desire to back burner the awards. This year all media discussion of the show’s private view was completely overshadowed when a blockade by climate protesters forced guests to climb over a side wallto access the show. There is a growing appeal for the Portrait Gallery to find a different sponsor. One of this year’s judges, Gary Hume, has called for precisely this.

Where does that leave the artists? I’ve seen calls on social media for them to boycott entering the awards on environmental grounds, though personally I find that a little naïve. BP as an organisation won’t be brought to its knees if you don’t enter this competition. Artists, who so often struggle for finances and recognition, will only hurt themselves with such a gesture. This award show, one of the pre-eminent portrait competitions in the world, and one of the only ones to be judged anonymously, remains a fabulous opportunity for figurative painters. Gary Hume has, I feel, shown the way by participating as a judge but also speaking out and using his position – this is probably a better way to go. BP’s involvement with the awards will become increasingly untenable if, in the end, year on year, all it generates is negative publicity. My advice would be: enter, but don’t be scared to use your voice.

Hopefully the National Portrait Gallery will wake up to what a brilliant thing its portrait prize really is. It remains a great show, still very much worth making the trip to see. Don’t let any of the negative voices cloud the fact that this is a brilliant selection of diverse and really inspiring portraiture, albeit ill served by the space it’s been allotted. Perhaps with a bit more loving care (and maybe a new sponsor) the show can take stock, refresh itself and once again fully take its place as the world’s biggest and best portrait prize.

(Dates for a subsequent tour to Edinburgh and Belfast to be announced.) 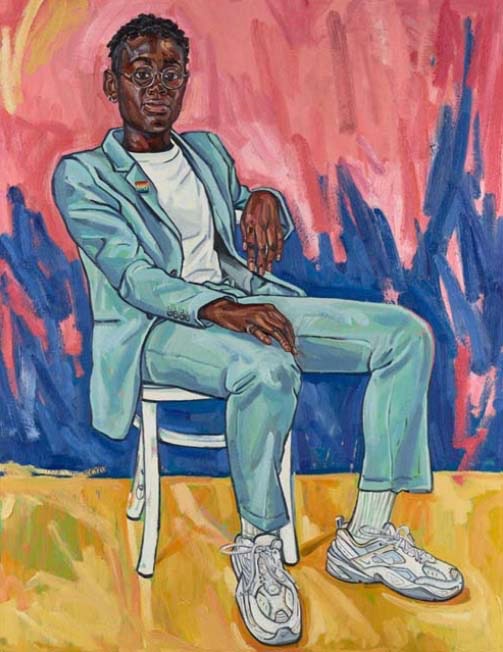